The use of the geo information or geographic information has been reserved for centuries to  the official realm of Geographers. At least that was the case until  last decade. Today this is no longer so. This evolution is partly explained by the boom in the development of databases, more user friendly software, more capable computers and ample improvements in monitors and scanners.

In addition, the democratization in the use of this type of information was dramatically leveraged when the “selective availability" was turned off by decision of  President Bill Clinton in areas covered by the satellites of the United States navigation system that were circumventing the planet. Starting in the midnight of May 1st 2000, any civilian equipped with a GPS device was able to know its geographical location in the planet and, with the necessary software and hardware, to generate his own maps.

This breakthrough didn’t stop at the technological level; moreover, the changes in the use of the geo information have been used in countless human disciplines, among others, official statistics. 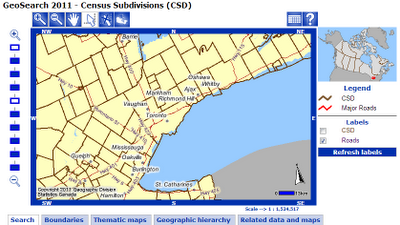 For example, the case of Stats Can - the Office of  Canadian statistics - offers GeoSearch , an application developed to display updated geographical information with Census 2011 data  . It allows to select locations in Canada, view them on a map and get basic geographic and demographic data. To find a specific place of interest, users can zoom in the page or even search by name, zip code, address, street, corner or geographic code any location desired in the country. The application displays the map indicating the geographic boundaries of the 2011 Census, as well as roads or identified water sources.

GeoSearch indicates also what  kind of standardized geographic area for the 2011 census you are viewing and what is the relationship with other geographical standardized census areas -. It has an option to create thematic maps on selected aspects of the census at various territorial levels: census divisions (CD), census subdivisions (CSD) and census extensions (CT).

There are also some independent visualization developments with a less technical but more intuitive interphase, such as http://censusfile.adamhooper.com/ that allows you to zoom in and display data based on mash ups (mixtures of sources) combining google maps and microdata. The application allows discovering such detailed data as the third and fourth language spoken in a particular neighborhood or the number of households parented by common-law in a given block. This is quite a detailed information, indeed. 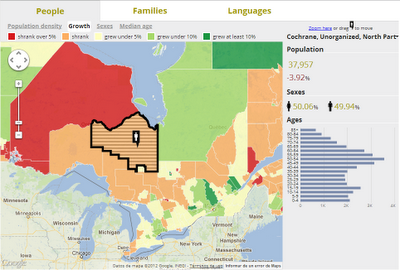 Another case with an interesting dissemination model behind, is the one from Statistics South Africa that offers in the http://geoinfo.statssa.gov.za/censusdigitalatlas page the product Digital Census Atlas, an interface based on the principle of interactive mapping where the user selects the variable and the territorial level for geographical representation. The product has four major components: maps overview, specific maps, comparative maps and reporting function.

This Office has also developed together with the private sector powerful applications for data visualization for iPhone and iPad for multiple geographical and thematic levels. Another initiative in this line of association is http://stats.touchlab.co.za/. This development invites to visit the neighborhood of the virtual visitors in 5 simple steps, choosing the language (english or afrikaans) in which you wish to consult and clicking on the thematic area of interest, with options between demographics, income, education or local employment characteristics. The basic unit of analysis is that of a municipality, quite bigger than that of the Canadian case. Anyway, once you have selected the location opens a box with data from the Census of that geographical unit. 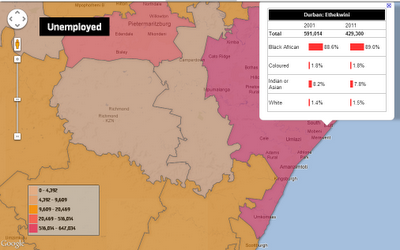 These two cases are encouraging and instructive at the same time. They not only show how governments and people are concerned to systematizing census data to make them visible and atractive to others in a geographic format but also they teach that an open data policy encourages a healthy and creative participation of the private sector in close collaboration with national offices of statistics.

Unfortunately, these two cases show the exception rather than the rule in Latin America and the Caribbean, especially compared with the developments evidenced in terms of visualization of geographic data in the present round of censuses. The reality of the region, in this sense, still has a long way to go. It would be advisable that more statistical offices could let themselves be influenced by cases such as the above, avoiding to procrastinate this kind of advances to the next round of censuses.