Smart cities in Latin America; between inclusion and utility companies

One of the distinctive contrasts of the speckled human geography of Latin America and the Caribbean map is the enormous density of their cities to the account of their bucolic rural areas. About 76.5% of its inhabitants are residing in 419 cities of more than 100,000 people. The region has one total population of nearly 600 million people , two times larger than the size of the United States. The region is home to several mega cities in desperate need of solutions
Their main 5 cities, according to the most recent population censuses, are mega-cities:

While sometimes cause of grandeur and pride for some countries, urban overpopulation puts at grave risk the performance of the modern capitals. As a starter, it asks for a higher energy and raw material demand, then it poses the tyrannical tension of hyper-efficiency in systems and infrastructures - incidentally something abandoned for decades - and to end a degraded life quality, dilapidation of resources and pollution can be a huge draw back for this situation. Therefore, the expected excellence in urban performance relies not only on the provision of physical infrastructure but also, and increasingly, in the availability and quality of the communication of knowledge and social infrastructure (i.e. social and intellectual capital).

Intelligent competitiveness
It's some sort of urban 'competitiveness' what brought to the development table the so-called smart cities, emerging as a response to the need of including all the urban vital resources in a single structural framework. These urban resources include in its core business technologies of information and communication (ICT technologies), social capital and environmental assets in order to ensure competitiveness, strengthening local attraction.

While it is true that most of the advances in technology for smart cities has taken place in the United States, Europe and Asia, some countries of South America are already using some of these advances, leading plans to champion on urban competitiveness in the region.

What are Latin Megalopolis doing?
Recently the first stone of 'Smartcity Santiago' was placed, an innovative prototype of intelligent city that will be located in the Huechuraba district. This model of city seeks to improve quality of life of its inhabitants and neighbors in a laboratory mode, incorporating projects to improve energy sustainability such as:

-Implementation of intelligent homes with a domotic system.
-Public transport provided with electric buses and taxis. 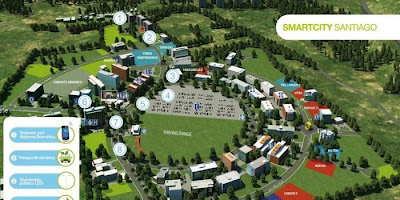 With these improvements based on innovative technologies, considerable savings are expected. In the case of public lighting savings of 40% are estimated compared to the traditional system. Regarding the new electric transport zero emissions of C02 and noiseless traffic is planned, still are under study. With the implementation of an automated electricity grid cuts of supplies will be done in less time from a central.

In addition, Rio de Janeiro has been implementing actively solutions of the smart city model within the framework of the next Olympics. with advances in their adaptation of Smart Grid technology even more sustainable than those achieved in Vancouver and London.

Examples of small and intermediate cities
But not all Latin American cities "smart" are giant cities. They also include metropolis of smaller scale such as the city of Curitiba. This city in the South of Brazil is considered innovative in everything, since buses are based on the concept of rapid transit and used by 70% of the residents, pursuing a balanced and diversified economic development strategy.

With a 3.5 million population, Curitiba demonstrates how to achieve the "Brazilian dream" of growth without a violent massiveness, of transport dysfunction or pervasive poverty; which certainly abounds in many other metropolitan areas of Latin America. The city's program to build "faros" - electronic libraries essentially – aimed for the poorest residents, for example, has become a model of global development of cities.

On the other hand, and thanks to an investment of $18 million, Buzios represents a new model of energy management and has become a point of reference for Latin America.
The project is funded by the national agency of Brazilian electricity ENEL with non reimbursable budgets allocated by the national authority for research and development, to help develop the network of energy of Brazil.

Critical views
The idea of these urban "live” laboratories aims to bring available technologies in the developed world and make them accessible to any citizen, to improve their quality of life.

However, many of the initiatives of smart in Latin American cities have not been based on the full adoption of cutting edge technology of smart's cities, although the examples show a joint development with local utility companies. Some cases, such as the one of the announced Santiago Smartcity, in direct collaboration with Chilectra, show that electric companies are leading the trend of these initiatives, seeking to integrate a range of pilot technologies, although their success is not yet assured.

It is inevitable to witness the medieval bias towards the isolation of communities that these urban developments in Latin America have. While there are also avant-garde models such as the one of Curitiba, many initiatives are in contrast to those like the sumptuous “countries” in the argentine province of Buenos Aires or the exclusive paseo Cayalá, near Guatemala City. This small town was built in 14 hectares in 12 months with the deliberate intention of holding higher classes of consumption. A virtual city on the outskirts of the capital, oblivious to crime and traffic congestion. This real estate development includes departments, sophisticated boutiques, parks, a church, nightclubs and restaurants, all surrounded by a white stucco wall.

Although we are speaking about a a dynamic concept, it is necessary to test the definition of smart city, considered to be as sustainable, at least some  economic mobility programmes for the active inclusion of all local urban social groups.